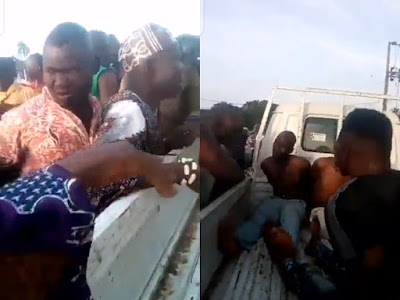 The suspects, it was gathered, had been terrorising the people of the area for months.

The suspected kidnappers, whose gang leader was identified as Ramoni, were said to have abducted four persons, including a Federal Road Safety Commission (FRSC) officer in Odo- Owa on Wednesday and demanded N8 million ransom.

It was gathered the family of the victims paid N2m ransom to the suspected kidnappers as first tranche.

They were on the verge of paying the balance of N6 million when the youths pounced on the kidnappers and arrested them, the source said.

He added the kidnappers had been handed over to security agents in the area.

It was also learnt a building belonging to the leader of the gang was set on fire by the irate youths in Omu-Aran.

When contacted, spokesman of Kwara Police Command Ajayi said the Command has not been officially informed of the development.

Okasanmi, however said he had been inundated with calls on the issue.

A government source informed The Nation military personnel had been mobilised to the area.