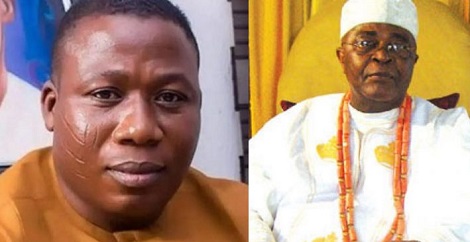 Ogun monarchs, women and chiefs in Egbaland, Ogun State, have rejected move for a Yoruba nation by Sunday Igboho.

The Ogun monarchs and others declared their unflinching support for the Alake of Egbaland, Oba Adedotun Aremu Gbadebo as regards the creation of Yoruba nation.

Oba Gbadegbo has been a topic on social media after comments that Nigeria is better as an indivisible entity and that the black race would fail if Nigeria failed.

The paramount ruler of Egbaland admonished those beating the drum of war to embrace peace, warning that no nation could accommodate 250 million people as refugees.

The oba made these comments in response to self-acclaimed activist, Sunday Adeyemo aka Sunday Igboho‘s declaration of a Yoruba nation.

Igboho’s group had threatened to invade the monarch’s palace for not supporting Yoruba nation.

Owing to this, Egba kings, chiefs, women leaders, and traders trooped out to stand in solidarity with their king.

The chief said it was ill-advised, and a desecration of the Yoruba’s respect for the truth, the royalty, and the elders.

Egba Women Chiefs and market leaders, who were led by Iyalode Alaba Lawson, were at the Ake Palace in Abeokuta to show solidarity and renew their loyalty to the king.

Lawson said that Oba Gbadebo should continue to stand by his clarion call for justice and peace, not only in Egbaland but also in Nigeria. She said ”we don’t want war in Nigeria.”

Olu of Itori, Oba AbdulFatai Akamo swore to always “defend the good name and the integrity of the Alake.”

He said this when he led a group of Egba Obas and Baales to pay homage to the Alake.

Oba Akamo stated that the Alake should not be bothered by what he called the “misguided utterances of social media hoodlums.”

He said they had no other business than to spread fake news and engage in “anti-social behaviour and irresponsible cultural attitude to their community leaders.”