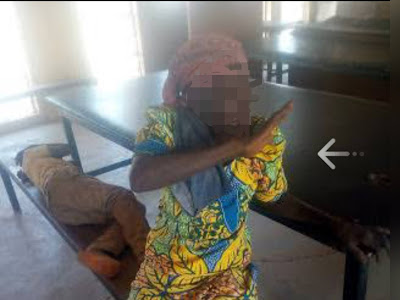 The son of an indigent woman who was accused of witchcraft has testified in Adamawa State how his mother was subjected to “cruel, inhuman, and degrading treatment” by her accusers.

The son told a panel of the National Human Rights Commission (NHRC) sitting in Yola that the accusation which started as a neighbourhood gossip was reinforced by a pastor who was later joined by some of his church members in abusing his mother.

The concerned son, who spoke in Hausa before the NHRC’s Special Investigation Panel on Sexual and Gender-Based Violence (SGBV), said things got out of hand one day when while in church, a pastor of the church said he got a revelation that his mother was a witch.

Continuing, he said the people in the church were also mentioning her name and saying she was the only one who could set them free.

“My mother was tortured, beaten to a stupor, injured, and stripped naked for alleged witchcraft, cultism, initiating children and some members of the community into witchcraft,” the complainant said.

A witness before the panel, who reinforced the charge against the woman, said that she was responsible for the death of his father, his two brothers, and a cousin.

A lot of people from the community, including her blood brothers, were willing to testify that she was truly a witch.

The woman’s son, still not convinced, said his mother had been suffering stigmatization and harassments in the community for accusations she knew nothing about, and urged the panel to intervene.

The NHRC Executive Secretary, Tony Ojukwu, who doubles as the Chairman of the NHRC SGBV panel, told everyone present that according to the law of Adamawa State, anyone suspected of witchcraft or any perceived wrong should be handed over to the police and not paraded publicly or inflicted with any form of injury.

The panel ruled that the respondents be investigated for alleged false accusations and offences relating to torture, inhuman and degrading treatment of the victim.

The panel said the accused woman would be investigated for alleged witchcraft under Section 187 of the Adamawa State Penal Code 2018.

The panel also ruled that the sum of N300,000 be paid by the respondents to the victim for the cost of treatment incurred as a result of injuries inflicted on her by members of the community.

The panel indicated that the NHRC would make a formal complaint to the state commissioner of police to investigate the matter.

The witchcraft accusation case was one of 14 petitions officially scheduled before the NHRC panel which began sitting in Yola on Monday.

Proceedings were conducted in confidence, with names of individuals in the different cases kept out of public knowledge.

The NHRC SGBV panel sitting in Yola is a continuation of a nationwide exercise that has taken place in some other centres, including Kano, Lagos and Enugu.