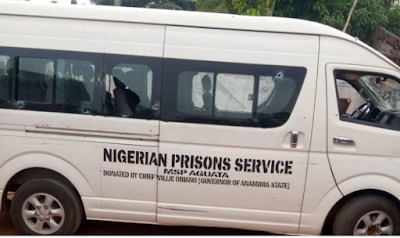 A vehicle conveying some suspects to court was attacked in Ekwulobia area of Aguata Local Government Area of Anambra State on Friday.

At least persons, including an official of the Nigerian Correctional Service, were reportedly shot dead in the attack which witnesses said happened around 11am.

Reacting to the incident, the Public Relations Officer of Anambra State Command of the Nigeria Correctional Service, Mr Francis Ekechukwu, said the command was devastated by the attack.

“You know these attacks have been on for sometime now, but we never envisaged it will get to us. Yes, there was an attack on our men, and two persons were killed. One of them is our staff, but the other is not.

“We are still investigating. We will issue a press release about this soon, but for now, we are trying to unravel how it happened and to go after the criminals. It was a gun duel, but two people were killed as a result,” he said.

The attack took place on a day that Governor Willie Obiano celebrated his seventh anniversary in office.

Twenty-four hours ago, naval officers and policemen were killed in different attacks in Anambra.

The armed gang killed three policemen at Neni junction in Anaocha Local Government Area of the State, while their vehicle was set ablaze.

The Naval officers were reportedly killed at Awkuzu in Oyi Local Government Area of the state.

Unknown gunmen are on rampage in the southern part of the country, targeting security operatives.

More than 10 officers have been killed in the last two weeks. Police stations have also been set ablaze.