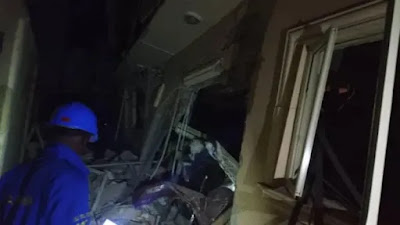 A one storey building has been destroyed at Alapere area of Ketu, Lagos, after a gas explosion rocked the building.

Officials of the Lagos State Emergency Management Agency, LASEMA, arrived the scene of the incident at No 44 Moses Street, Oshogun, Alapere, Lagos for rescue operation.

Director General, LASEMA, Dr. Femi Oke-Osanyintolu said on arrival at the scene, it was discovered that the storey building was in a state of collapse with several visible cracks on load bearing walls

He said initial investigation suggested that that a gas cylinder explosion triggered the incident.

Oke-Osanyintolu said no lives were lost, but added that a young female, two male children and an adult male were rescued.

The LAAEMA DG said the building has been damaged and that the agency was working with the Lagos State Building Control Agency, LASBCA and Ministry of physical planning on the incident.

Watch the video below: