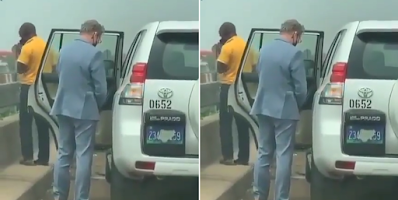 A Nigerian man has shared the moment he filmed a foreign Diplomat urinating along a major road in Lagos.

In the video already circulating across social media, the Diplomat who appeared to be pressed is seen holding his private to answer the call of nature while standing next to his official SUV.

Many Nigerians have however condemned the act, stating he can;t do it in his country of origin while many said Nigerians who urinate of the roads should be blamed for teaching him such an act.

Watch the video below…