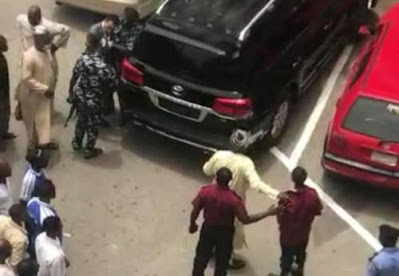 Umar Danladi, Chairman of the Code of Conduct Tribunal (CCT) has been caught on camera allegedly physically assaulting a security guard at Banex plaza in Wuse, Abuja.

In the video exclusive obtained by SaharaReporters, Umar was seen speaking angrily, scolding and shouting at the yet-to-be identified man.

The CCT chairman also launched a barrage of attacks on the young man and violently kicked him before he was restrained by the crowd, including police officers attached to him.

He was then forced into his vehicle by the police officers. 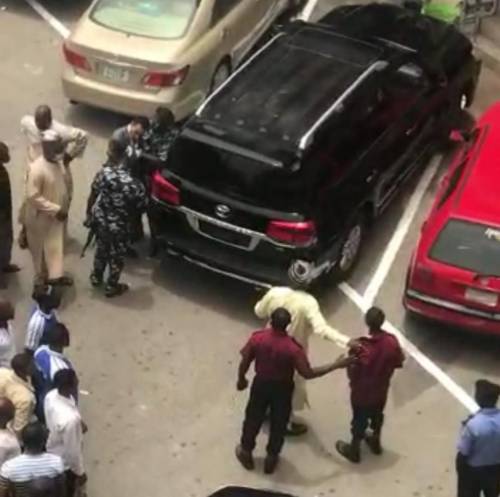 Information made available from an eyewitness and the brutalised security guard was to that all the assaulted young man did was to ask Umar to park his car very well at the plaza, only for the CCT chairman to slap him, pull him down and inflict injuries on him.

The action however didn’t go well with people who felt Umar cheated the security guard.

They suddenly became aggressive and started stoning the vehicles in the CCT chairman’s convoy, smashing their windscreens and windows.

He swiftly intervened and made legal representation at the Maitama Police Station under the Federal Capital Territory Police Command where Umar had gone to lodge an alleged false complaint against the security guard.

Reacting to the above, counsel for the assaulted security guard, Ihensekhien Samuel, said steps would be taken to promptly sue and prosecute Mr Danladi Umar.

He said, “This is a breach of extant provisions of judicial code of any arbiter, and the height of impunity of any kind.”

He assured that the young security guard would get justice.

Vacate South-East in 48hrs or be treated like ‘bush meat’, Ohanaeze warns Fulani with AK-47