Vanessa Bryant represented her husband Kobe Bryant as he was inducted into the Naismith Memorial Basketball Hall of Fame on Saturday.

At the event , in Springfield, Massachusetts, the 39 year-old mother of four, gave a rare tribute about Kobe’s career and how he was looking forward to the Hall of Fame ceremony before his tragic death. 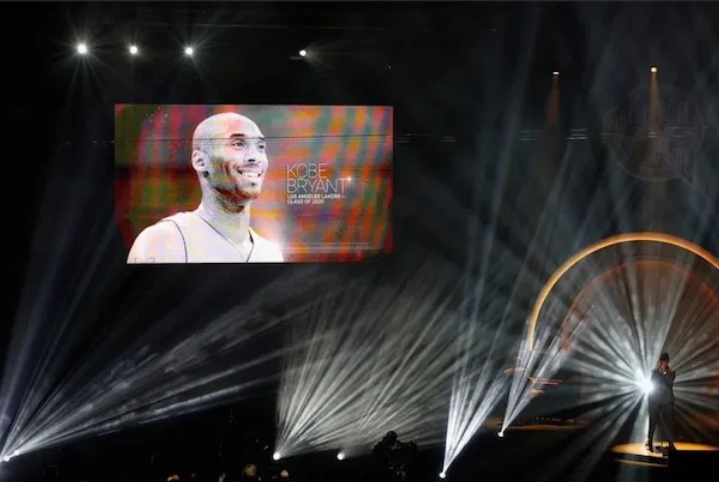 Bryant was killed in a tragic January 2020 helicopter crash alongside his daughter Gianna, 13, and seven others. The father-daughter pair is survived by Vanessa and their three other daughters: Natalia, 18, Bianka, 4, and Capri, 22 months.

“Last February, I called Michael and asked if he would introduce Kobe tonight and he graciously accepted. Thank you for being here, Michael. Kobe admired you, this means so much to us,” Vanessa told Michael Jordan, who presented Bryant into the Hall of Fame.

“I used to avoid praising my husband in public because I felt like he got enough praise from his fans around the world and someone had to bring him back to reality. Right now, I’m sure he’s laughing in heaven because I’m about to praise him in public for his accomplishments on one of the most public stages. I could see him know, arms folded, with a huge grin saying, ‘Isn’t this some s—?’ He’s still winning,” Vanessa said.

“I wish my husband was here to accept this incredible award. He and Gigi deserve to be here to witness this. Gigi would be so proud to watch her daddy get enshrined in the Basketball Hall of Fame. I know Kobe was looking forward to being here. He asked the Hall of Fame to specifically add a sixth ticket for Capri, he was so happy,” the Bryant matriarch continued.

“I don’t have a speech prepared by my husband because he winged every single speech. He was intelligent, eloquent and gifted at many things including public speaking. However, I do know that he would thank everyone that helped him get here including the people that doubted him and the people that worked against and told him he couldn’t attain his goals. He would thank all of them for motivating him to be here. After all, he proved you wrong,” she said.

“All of the athletes that share a Hall of Fame award share the fact that they have to sacrifice a part of their lives to dedicate more time to their craft. It takes a lot of self-drive, dedication and discipline. No one can take away from their own success. Kobe’s personal stats speak for themselves. Kobe was on a different level, he never took shortcuts when it came to basketball. He gave this game his all. Kobe played through injury and injury,” Vanessa recalled. “To name a few: he had IVs administered during halftimes to play through food poisoning and the flu; he played with a broken nose; he had a broken finger and had it snapped back in place just enough to finish the game; he also taught himself how to use his left hand to play the rest of the season while his finger healed; he even swished two free throws with a torn Achille’s and walked off the court on his own.”

“I’ll never forget the look he gave me as he walked off the court that game. I knew it was bad. The crowd was cheering and I was reassuring Natalia and Gianna that daddy would be okay just like any other injury. But as you walked into the tunnel, there was no wink and there was no kiss blown my way. I could see the concerned look on his face. That injury was big, but his comeback from that injury was bigger.”

Giving a nod to Jordan, Vanessa also mentioned how much her late husband appreciated his fans because of his days looking up to his mentor. “People don’t know this but one of the reasons my husband played through injuries and pain was because he remembered being a little kid sitting in the nosebleeds with his dad to watch his favourite player play,” she said before looking at Jordan’s direction as the crowd cheered.

“He could recall the car ride, the convos and the excitement of being lucky enough to have a seat in the arena. Kobe didn’t want to disappoint his fans, especially the ones in the 300 sections that saved up to watch him play. The kids with the same excitement he once had. I remember I asked him why he couldn’t sit a game out because he was hurting, he said, ‘What about the fans who saved up to watch me play just once?’ He never forgot about his fans. If he could help it, he would play every minute of every game, he loved you all so much.”

“Kobe had many accomplishments: five-time NBA champion, five-time New York Times bestselling author, 18-time All Star, a league MVP and two-time Finals MVP, two-time Olympic gold medal winner. He’s also the first professional athlete to win an Oscar. The list goes on but his most cherished accomplishment was being the very best girl dad,” Vanessa noted. “Usually people thank everyone who has helped them get here. But since I don’t have Kobe’s specific list, I want to thank my husband. He did the work, he broke those records and he inspired people to be great. I want to thank him for, somehow, finding ways to dedicate time to not only being an incredible athlete, a visionary entrepreneur and storyteller, but also being an amazing family man.”

Then, Vanessa read a letter she wrote to Kobe, giving more thanks to him for everything during their two decades of marriage after they first met on the set of a music video in 1999, when Kobe was 20 and she was 17.

Bryant was selected as part of the Hall of Fame’s class of 2020 alongside Kevin Garnett and Tim Duncan, as well as WNBA star Tamika Catchings, coaches Kim Mulkey, Rudy Tomjanovich, Barbara Stevens and Eddie Sutton.

The annual event was originally slated to take place in August 2020, but was delayed by the ongoing COVID-19 pandemic.