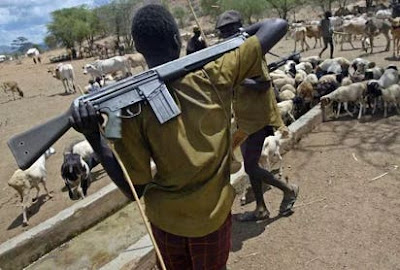 The youth wing of the apex Igbo socio-cultural body, Ohanaeze Ndigbo, has given a 48-hour ultimatum to every Fulani with AK-47 to leave the South-East or be treated like “bush meat”.

The ultimatum is coming on the heels of the revelation that over 332 Fulani camps across South-East are occupied with AK-47 carrying Fulani militia.

Former Deputy Inspector General of Police, DIG Celestine Okoye, had in a media interview, said that “there are 332 Fulani herdsmen settlers heavily armed with AK47 rifles across the five states of the South East zone waiting to unleash terror on Ndigbo.”

He therefore, warned “all Fulani herdsmen with AK47 rifles to immediately vacate their hidden locations in Igbo land within 48 hours or risk being treated like bush animals wherever they are sighted with weapons.”

OYC accused President Muhammadu Buhari and the security agencies of maintaining criminal silence over the disturbing revelation, saying they should be held accountable for any security breach or genocidal attack in Igbo land.

According to OYC Ndigbo will be left with no option than to resort to self defense which may eventually lead to fragmentation of the country.