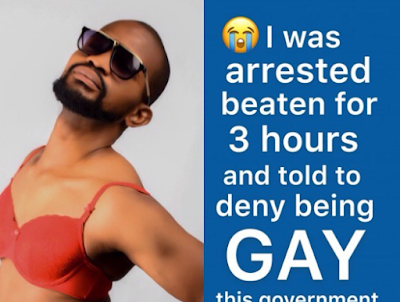 Uche Maduagwu has made a stunning revelation again.

Recall he had once come out to say he was 100percent gay and weeks after made a u-turn to say he wasn’t gay.
Now Uche says the U-turn he made back then was made under duress.
According to Uche, some security agents accosted him and forced him to deny he was gay, and that was the reason he made that post.
Making his claims, Uche wrote;
”Last month i was arrested along lekki axis by armed security men i wont disclose the particular agency but they came from #abuja i was beaten for hours and told to deny being #gay on social media or they will come back to do worse i cant say more for now because of security reasons #lagos #share”