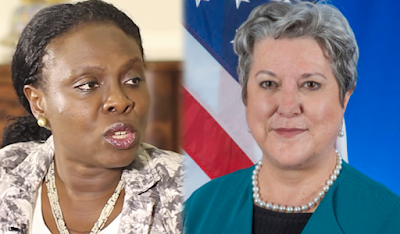 Global rights body Amnesty International on Thursday said the United States “could have taken more time to evaluate” all available evidence before publishing its controversial report that appeared to downplay the role of Nigeria’s brutal military in using lethal force to quell the historic #EndSARS demonstration last October.

The U.S., in its ‘2020 Country Reports on Human Rights Practices: Nigeria,’ said Amnesty International’s report on the shooting at Lekki Toll Gate, Lagos, where soldiers reportedly opened live rounds on protesters, was uncorroborated, a statement that effectively knocking the rights group’s position that at least 10 civilians were shot dead by Nigerian troops deployed against protesters in the upscale Lagos neighbourhood on October 20, 2020.

The U.S. report also stated that soldiers were only sent to the protest ground to enforce a curfew and they shot into the air, a position that pro-government commentators said discredited widespread reports, including a live stream of the attack on Instagram, of how soldiers opened live rounds and left a trail of deaths and injuries.

“On October 20, members of the security forces enforced curfew by firing shots into the air to disperse protesters, who had gathered at the Lekki Toll Gate in Lagos to protest abusive practices by the Nigerian Police Force’s Special Anti-Robbery Squad (SARS),” the U.S. report said. “Accurate information on fatalities resulting from the shooting was not available at year’s end. Amnesty International reported 10 persons died during the event, but the government disputed Amnesty’s report, and no other organisation was able to verify the claim.”

The report has since generated controversy, with pro-government agents gleefully parroting it to puncture the heap of evidence that suggests soldiers’ deadly force.

Many sources, including those from security sources, told Peoples Gazette that casualties were recorded on the night of the attack after soldiers fired at protesters who were sitting on the ground, singing the national anthem and waving the Nigerian flag.

A Nigerian celebrity, DJ Switch, also recorded a live Instagram session during the melee, showing gory scenes and saying seven persons had died before her device went off.

She later asserted that casualty figures rose to 15 in a later update on the incident.

Amnesty International’s Nigeria maintains that the testimonies of witnesses at the Lekki Toll Gate affirmed that soldiers fired live rounds at demonstrators as against claims of firing blank bullets in the air.

Amnesty Nigeria chief Osai Ojigho told Peoples Gazette on Thursday that “Amnesty International stands by its initial findings that in October we released based on the information that we’re able to independently verify as at that time and we’ve continued to encourage the state government and the federal government to do justice by the people.

“Amnesty International had asked for independent and transparent investigations into what really happened at the Lekki Toll Gate and we still haven’t seen that and that is what is really worrisome especially because a lot of people will not be able to move on until justice is served.”

Contrary to U.S.’ claims that no other organisation confirmed Amnesty’s findings, Ms Ojigho said her organisation carried out its investigation after the incident while also considering other credible reports.

“Amnesty International stands by its initial findings that in October we released based on the information that we’re able to independently verify as at that time and we’ve continued to encourage the state government and the federal government to do justice by the people.

“There have been other reports by other organisations and also shared on social media attesting to the fact that different people who were located at the Lekki Toll Gate at the time of the incident were reportedly killed.

“CNN carried the report about a young man that died and when the younger brother called the phone number and people picked the call and they claimed that ‘this is not your brother, your brother is dead,” Ms Ojigho said.

Speaking further, she said “there are still a lot of unclaimed bodies in many of the Lagos state hospitals and it raised the question ‘who are those people?’ ‘Would they be allowed to be investigated?’

“Check whether these are people who suffered gunshots for example how long they have been there in order to rightly pinpoint the time they were in.

“If you look at the Amnesty report, we were able to use satellite imagery and information which were picked through verified accounts to show the movement of officers to the Lekki Toll Gate,” she said while adding that “the issue now really is not about government just giving a blatant denial but about how they need to carry out investigation without any fear.

Ms Ojigho said until justice is served in the Lekki killings, Nigerian authorities will continue to carry out grievous human rights abuses.

She noted that although the issues on #EndSARS are ongoing, the U.S. report “is meant to show an unbiased assessment of the current state of affairs with the country.”

The rights advocate expressed confidence that the truth will soon be uncovered as Nigeria moves closer to the six months’ anniversary of the shooting.

“Right now, people are still careful to be publicly identified and this is what has been used by many that they haven’t seen anyone come forward on what really happened,” she said.

Mrs Ojigho, however, said that the U.S. “could have taken more time before evaluating the situation,” even though she was not in a position to determine the activities of the country’s diplomatic officials.

Ms Ojigho said Amnesty will wait also for additional facts from the Lagos judicial panel and the medical facilities where the wounded were taken.

“We’ll retain our call that everything must be open, transparent, and families have the right to know the truth,” she said. “The system needs to work for the people and not only for the government of those who are in the office.”