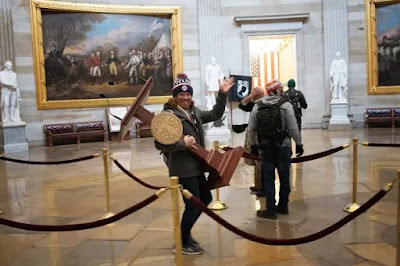 Former U.S. President Trump has offered some revisionist perspective about the rioters he incited to storm the U.S. Capitol on 6 Jan.

He said they posed “zero threat” to those inside the building and they were even kissing and hugging the police. 

Six people, including a police officer, died during the breach, on a day the Congress was certifying the electoral college votes won massively by President Joe Biden.

However, the former president told Fox News host Laura Ingraham that the rioters were “hugging and kissing” police upon entry.

“Look — they went in, they shouldn’t have done it. Some of them went in and they’re hugging and kissing the police and the guards. They had great relationships,” Trump said.

Some Capitol police officers are under investigation for alleged actions supporting the Capitol breach, including an officer who may have taken a selfie with one of the rioters.

“They’re persecuting a lot of those people. And some of them should be — some things should happen to them, but when I look at antifa in Washington even, what they did to Washington and what they did to other locations and the destruction and frankly the killing and the beating up of people … why aren’t they going after antifa?”

Trump also described as “disgraceful” the protective fencing being put in place around the Capitol after the invasion by his mob.

“I think it’s disgraceful — it looks, for the world to watch — absolutely, it’s a political maneuver that they’re doing. It was zero threat right from the start, it was zero threat,” Trump claimed.

The FBI has made hundreds of arrests and charged suspects in connection to Jan. 6 riot.

Many of those arrested have connections to far-right groups such as the Proud Boys or the Oath Keepers.

Dear Women, Know Your Value and Do Not Let Anyone Take You For Granted – Deborah Vanessa Advises

Sporadic shootings in Borno as soldiers protest non-payment of allowances