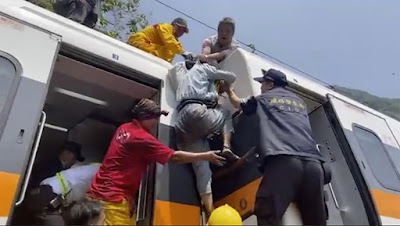 A Taiwan express train with almost 500 aboard derailed in a tunnel on Friday, killing at least 48 passengers and injuring 66 in the island’s worst rail disaster in almost four decades.

Images from the scene showed carriages in the tunnel ripped apart by the impact, with others crumpled, hindering rescuers in their efforts to reach passengers, although by mid-afternoon no one was still trapped.

“People just fell all over each other, on top of one another,” a woman who survived the crash told domestic television. “It was terrifying. There were whole families there.”

The crash, north of the eastern city of Hualien, killed the driver of the train carrying many tourists and people heading home at the start of a long weekend traditional holiday to tend to family graves.