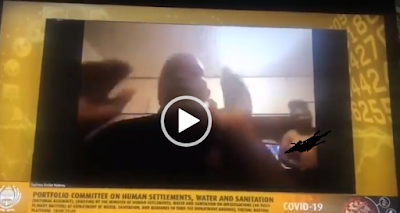 A South African traditional leader was left red-faced when his wife appeared stark n*ked during a virtual parliamentary meeting on Tuesday.

Inkosi Xolile Ndevu, a member of the National House of Traditional Leaders, seems to have neglected to inform his wife that he had entered a virtual meeting of the co-operative governance and traditional affairs (Cogta) portfolio.

While Ndevu was busy explaining how the Eastern Cape province was working with medical doctors on the matter of initiate deaths, his wife walked into the room stark n*ked, oblivious that she was appearing on national television.

Muthambi went on to express her exasperation at how this was not the first time that such an incident had happened during a session of the traditional leaders. She told National House of Traditional Leaders chairperson Inkosi Sipho Mahlangu,

An embarrassed Inkosi Ndevu apologised profusely for the incident saying that he was unaware that his wife had been in the background.

In an interview after the meeting, Ndevu claimed that he was technologically challenged and had not received any training on using Zoom. He told the TimesLive,

He also claimed that the meeting had gone past the scheduled time of 10 PM when his wife appeared in the live meeting.

Inkosi Xolile Ndevu, a member of the National House of Traditional Leaders, was discussing initiate deaths in the Eastern Cape during a co-operative governance and traditional affairs (Cogta) portfolio meeting when disaster struck on Tuesday. pic.twitter.com/6w2lDpP8Zz