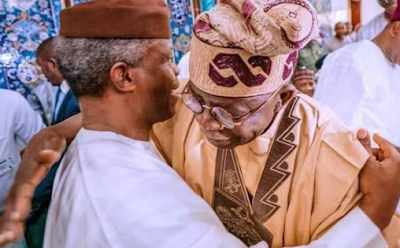 The 69th birthday and 12th colloquium of All Progressives Congress leader, Bola Tinubu, was on Monday disrupted by bad weather.

As a result, many dignitaries who were billed to travel to Kano by air were forced to make a U-turn.

Some of those affected include Vice-President Yemi Osinbajo, Speaker of the House of Representatives, Femi Gbajabiamila; the Secretary to the Government of the Federation, Boss Mustapha; Minister of Information and Culture, Lai Mohammed; and the Minister of the Interior, Rauf Aregbesola.

Osinbajo’s Spokesman, Mr. Laolu Akande, said in a tweet that Osinbajo would monitor the event virtually alongside the President.

He tweeted, “VP Osinbajo spending the day celebrating Asiwaju on his 69th birthday was on course to Kano this morning until weather conditions aborted travel plans. He’ll alongside Mr. President join the 12th BAT Colloquium virtually from the Presidential Villa. Happy birthday Asiwaju.”

The event, which was expected to have begun at 12pm was shifted to 12.30pm due to the absence of several VIPs, a moderator informed attendees on the Zoom platform.

However, it was learnt that about 60 members of the House of Representatives led by Majority Leader, Ado Doguwa, who are already within Kano State, are expected to attend.