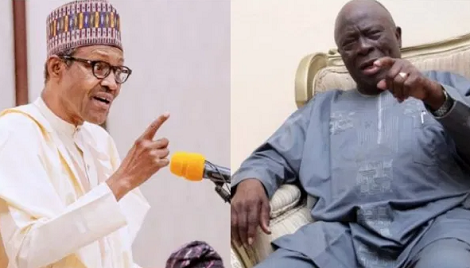 Leader of the Pan-Yoruba Socio-Cultural Organisation, Afenifere, Chief Ayo Adebanjo has said there will be no 2023 if President Muhammadu Buhari did not restructure Nigeria.

He said Buhari must restructure Nigeria before any election could take place.

Adebanjo stated that the president could not keep this country together under the obnoxious 1999 Constitution.

“He rigs the election and heads to the tribunal and the Supreme Court which he dictates to,” Adebanjo said in an interview with Tribune.

He said Afenifere once supported Buhari because of restructuring, which he had now failed to do.

“I have no personal grudge against Buhari. The military, who gave us the constitution, have gone back to their barracks. I want you to emphasise this: for some of the misguided intelligentsia among them and among our people, I have repeatedly said that this constitution is a fraudulent document.

“The military made it in 1966. They have not rebutted that. I have said it publicly that if Buhari truly loves this country, why is he opposed to restructuring? Why is he hesitant? It is this restructuring our founding fathers: the Sardauna, Awolowo, Nnamdi Azikiwe, Tafawa Balewa, Aminu, Oyibo Ojigwe, all agreed to at independence in 1960.

“Is he more Fulani than the Sardauna? Is he more intelligent than our founding fathers? I even challenged Femi Adesina and Garba Shehu, who are defending all the nonsense the government is doing.

“The confusion in this country today is because the people refused to address the issue we are talking about.

When we said they are more corrupt, it is not a case of just blackmailing them. One of the reasons we supported Buhari in 2007 was when we thought he was going to do restructuring,” he said.