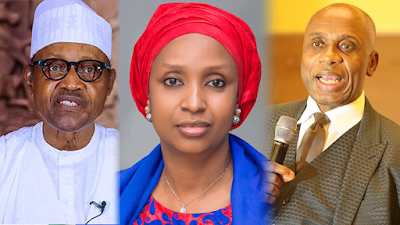 Buhari said her removal followed a recommendation by Rotimi Amaechi, the Minister of Transportation.

Ms Hadiza will face an administrative panel of inquiry to investigate the management of NPA.

According to a statement by the president’s media aide, Garba Shehu, late Thursday night in Abuja, said,” The president has also approved that the Managing Director, Hadiza Bala Usman step aside while the investigation is carried out. Mr Mohammed Koko will act in that position.

“The panel is to be headed by the Director, Maritime Services of the Ministry while the Deputy Director, Legal of the same ministry will serve as Secretary. Other members of the panel will be appointed by the minister.”

Officials at the NPA praised Ms Bala Usman as “highly competent and innovative” in her leadership role but said her long-running battle with Rotimi Amaechi ultimately led to her removal from office.

“The minister removed her because he could not intimidate or control her,” an official said under anonymity. “It is unfortunate that the minister has now sacrificed competence for undue loyalty.”

Officials said Messrs Koko and Amaechi are allies, but the minister was able to easily promote the finance director because it was a choice that appealed to the president’s sentiment.

“Amaechi knew that the president would be indifferent as long as the replacement is a northerner,” the official said.

It was unclear whether or not Ms Bala Usman would contest her removal. She was reportedly confirmed for a second term barely a few weeks ago.

Mr Amaechi also visited her on a working visit to the NPA barely four weeks ago, giving the impression that all was well between them.

“It is shocking to see that she has been removed barely four weeks after they were seen working together in Lagos,” a source familiar with the matter said. “Many of us had assumed that they were back on good terms.”

Ms Usman was appointed as NPA chief in 2016 and frequently propagated her reform policies that sought to redirect the organisation, which is one of the top revenue-generating entities of the Nigerian government.