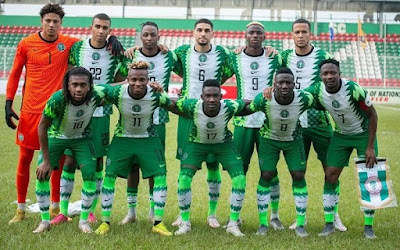 The 2013 African champions climbed four places in April’s rankings released by the Federation of International Football Association on Thursday.

In the month under review, Nigeria garnered 1487 points to become the third-best team on the continent after overtaking Algeria and Morocco.

This leap is not far- fetched from the country’s impressive results during last month’s Africa Cup of Nations qualifiers against Benin Republic and Lesotho.

Despite dropping two places, Senegal are ranked first in Africa and 22nd in the world with 1542 points while Tunisia’s Carthage Eagles – who are unmoved – remained 26th globally and second in Africa after accruing 1512 points.

Guinea Bissau are the biggest mover in April – moving a massive eleven places to the 108th position in the world while Nambia are ranked 111th with a 10-place move.

For Africa Cup of Nations debutants Comoros, losing 4-0 to Mohamed Salah’s Egypt on the last day of their Afcon qualification drop a place in the ratings – to be ranked no. 36 in Africa and 131st worldwide.

The order of the top six has not changed, with Belgium leading the pack while France, Brazil, England, Portugal and Spain follow in that order