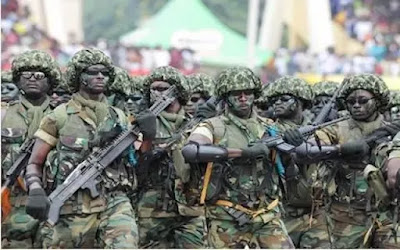 There were sporadic shootings on Thursday night in Borno as soldiers protest deployment to a location in the theatre of operation.

The soldiers shot sporadically into the air to express their grievance for the deployment as they did not have the equipment to match the firepower of Boko Haram.

The soldiers from the Maimalari barracks trooped to the Theatre Command in Borno State to protest the deployment.

They accused the military authority of not paying their allowances and giving them dilapidated equipment to fight the insurgents.

Channels TV quoted the Media Coordinator for Operation Lafiya Dole, Colonel Ado Isa, confirming the protest, as he said there was a minor issue involving troops welfare and administrative issues which was promptly addressed.

According to him in an interview with BBC Hausa Services, “No one knows what happened to the money, but God willing, the president will investigate to find out where it went or where the goods went.”

Monguno stated that as long as long as there was no proper investigation, he would not say anything, it said “the money is gone.”

He said the arms purportedly purchased with the money had not been seen.

The NSA added that the new security chiefs said they had not seen the arms purchased with the money either.

Monguno later backtracked, saying he was quoted out of context as he did not categorically say that funds meant for arms procurement were missing under the former Service Chiefs as reported or transcribed by some media outlets from the BBC interview.