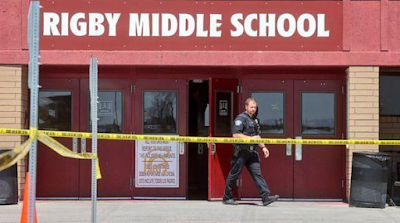 Two students and one adult were injured, police said. The adult was treated and released from Eastern Idaho Regional Medical Center, while the two students — one girl and one boy — had non-life-threatening injuries, officials said.

Both will remain in the hospital overnight, and may require surgery, hospital officials said at a press conference.

The sixth grader removed a handgun from her backpack and began firing just after 9 a.m., the Jefferson County Sheriff’s Office said at the press conference. Two people were shot in a school hallway, before she moved outside and another person was shot, the sheriff’s office said.

A teacher disarmed the girl and held her until police arrived.

A motive for the shooting is still under investigation, authorities said. The sheriff said he did not know where the student obtained the handgun.

“This is the worst nightmare a school district could ever face,” Superintendent Chad Martin said at the press conference. “We prepare for it, but we’re never truly ready for it.”