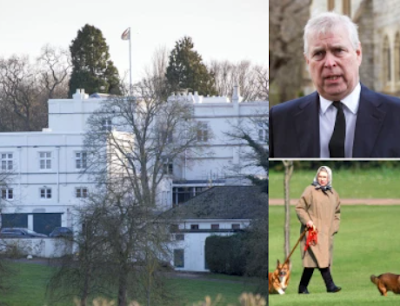 A couple were detained after they manage to scale the fences at the Queen’s Windsor estate, according to reports.

A man, 31, and his 29-year-old girlfriend entered the Royal Lodge grounds, in Windsor Great Park, last Sunday, according to the Sun.

The Queen’s son Prince Andrew officially lives at the lodge and was said to be there at the time of the breach.

Her Majesty, 95, rides her horses, walks her dogs and attends the church on the grounds. The area was breached just over a week after her husband Prince Philip’s funeral.

A source said: ‘This is an astonishing lapse. ‘Everyone was on high alert after the first intruder, now this happens. Heads could roll.’ Police confirmed they responded to a report of two people on the lodge grounds.

They arrested the man and woman and took them to Maidenhead police station. The couple have been released on bail.

Police said in a statement: ‘Thames Valley Police was called to reports of two trespassers in the grounds of the Royal Lodge at Windsor Great Park on Sunday afternoon (25/4). ‘Two people, a 29-year-old woman and a 31-year-old man, both from London, were arrested on suspicion of being found in or upon enclosed premises and have been released under investigation while enquiries continue.

‘There was no risk to any individual on the site.’