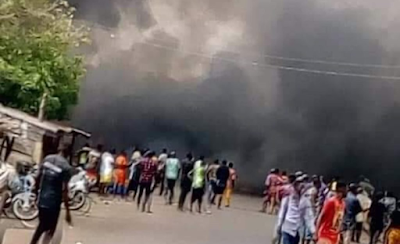 Many have been feared dead following a tanker explosion in Oshigbudu, Agatu Local Government Area of Benue State.

According to an amateur video sent by an eyewitness on Sunday, many houses, shops and properties were also destroyed in the inferno.

Agatu local government area is some four hours drive from Makurdi, the Benue State capital and help from this axis is unlikely as the fire is believed to have gone out of control.

Many residents of the area called for help from relevant authorities to come to their rescue as the only fire station is in Otukpo Local Government Area, a one hour thirty minutes drive from the scene of the fire.

When contacted, the Executive Secretary of the State Emergency Management Agency, Dr Emmanuel Shior confirmed the incident to Channels Television via a telephone conversation.

While noting that he would brief Governor Samuel Ortom on the development, he said a statement will be issued shortly.

“The fire inferno at Oshugbudu in Agatu local Government, my local government of origin today, 18-04-2021 which has claimed so many lives and destroyed properties yet to be quantified, is the Chief of all the calamities that have fallen us this year,” he said.

“As I pray God to comfort the good people of Agatu and most especially those directly involved, over the lost, I wish to call on Government at all levels and spirited individuals to come to our aids in order to drastically reduce the effect of the disaster on the people. Once again may God grant us the fortitude to bear the huge loss.”