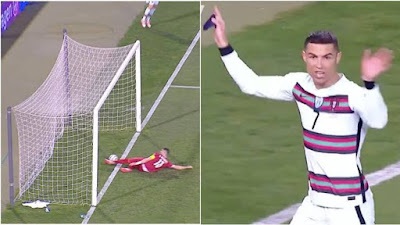 Dutch referee, Danny Makkelie, has apologised for denying Cristiano Ronaldo the winning goal in Portugal’s 2-2 draw with Serbia in a World Cup qualifier on Saturday.

Serbia defender, Stefan Mitrovic, tried in vain to clear Ronaldo’s effort in stoppage time, but the ball crossed the line.

With no VAR or goal-line technology, Makkelie waved play on much to the anger of Ronaldo and his teammates.

“As per FIFA’s policies, all I can say is that I apologised to the national coach, Mr. Fernando Santos, and to the Portuguese team for what happened.

“As a referee team, we always work hard o make good decisions. When we are in the news in this manner, it doesn’t make us happy at all,” Makkelie told A Bola.

The 38-year-okd has been an international referee since 2008 and took charge of the 2020 Europa League final between Sevilla and Inter Milan.