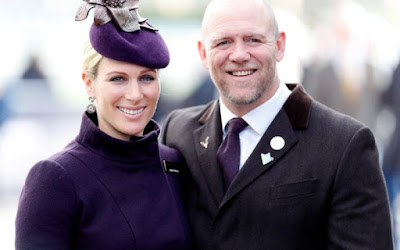 A spokesperson for the couple announced, “Zara and Mike Tindall are happy to announce the birth of their third child, Lucas Philip Tindall.” The bundle of joy, who joins siblings Mia Grace and Lena Elizabeth, weighed in at 8lbs 4oz.

On his The Good, The Bad & The Rugby podcast, Mike, a retired rugby pro, shared the “chaotic” story of baby Lucas’ birth. On the latest episode, Mike said that their son “arrived very quickly” and was born on the bathroom floor! As Mike explained, Zara’s friend Dolly Maude was with them and recognized that they wouldn’t make it to the hospital in time for the baby’s arrival.

“So it was running to the gym, get a mat, get into the bathroom, get a mat on the floor, towels down,” he recalled, “‘brace-brace-brace.'”

“Fortunately, the midwife, who was going to meet us at the hospital wasn’t that far away,” he explained,

“so she drove up, got there just as we’d assumed the [position]. And then the second midwife arrived just after the head had arrived.”

Zara—who is the only daughter of Princess Anne and cousin to Prince William and Prince Harry—and Mike announced her pregnancy in late 2020.

There is no rift between Buhari and Tinubu - Presidency