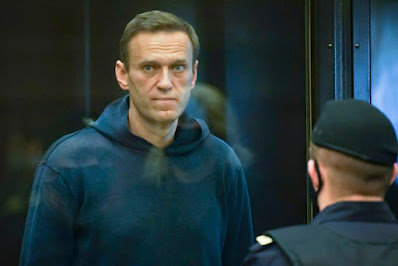 Russian opposition leader Alexei Navalny has started a hunger strike in prison to protest officials’ failure to provide proper treatment for his back and leg pains.

In a statement posted Wednesday on Instagram, Navalny complained about prison authorities’ refusal to give him the right medicines and to allow his doctor to visit him behind bars.

He also protested the hourly checks a guard makes on him at night, saying they amount to sleep deprivation torture.

Navalny said in his statement that he had no choice but to protest with a hunger strike because his physical condition has worsened. He said his back pains have spread to his right leg and he feels numbness in his left leg.

“What else could I do?” he wrote. “I have declared a hunger strike demanding that they allow a visit by an invited doctor in compliance with the law. So I’m lying here, hungry, but still with two legs.”

The 44-year-old Navalny, who is President Vladimir Putin’s most outspoken opponent, was arrested in January upon his return from Germany, where he spent five months recovering from a nerve-agent poisoning that he blames on the Kremlin. Russian authorities have rejected the accusation.

Last month, Navalny was sentenced to 2 1/2 years in prison for violating the terms of his probation during his convalescence in Germany. The sentence stems from a 2014 embezzlement conviction that Navalny has rejected as fabricated — and which the European Сourt of Human Rights has ruled to be unlawful.

Navalny was moved this month from a Moscow jail to a penal colony in Pokrov in the Vladimir region, 85 kilometers (53 miles) east of the Russian capital. The facility called IK-2 stands out among Russian penitentiaries for its particularly strict inmate routines, which include standing at attention for hours.

Navalny’s Instagram also had a picture of a letter to the prison chief, dated Wednesday, in which he declared the hunger strike.

“Every convict has the right to invite a specialist for a check and consultation,” he wrote. “So I demand to let a doctor see me and declare a hunger strike until it happens.”

But Navalny complained that authorities only gave him basic painkiller pills and ointment for his back and legs while refusing to accept medications prescribed earlier by his doctor or to share the diagnosis from his examination.

In a note earlier this month, Navalny described his prison as a “friendly concentration camp.” He said he hadn’t seen “even a hint at violence” there but lived under controls that he compared to George Orwell’s “Nineteen Eighty-Four.”

Navalny, whom prison authorities had earlier marked as a flight risk, said he was subject to particularly close oversight, including a guard waking him up every hour at night and filming him to demonstrate he is in the required place.

“Instead of medical assistance, I’m subjected to sleep deprivation torture, being woken up eight times every night,” he said in Wednesday’s statement.

During a video call with Putin on Tuesday, German Chancellor Angela Merkel and French President Emmanuel Macron emphasized the need for Russia to protect Navalny’s health and to respect his rights in compliance with the European Convention on Human Rights, according to Macron’s office.

The Kremlin said in its readout of the call that Putin offered an “objective explanation” in response to questions Merkel and Macron asked about Navalny.