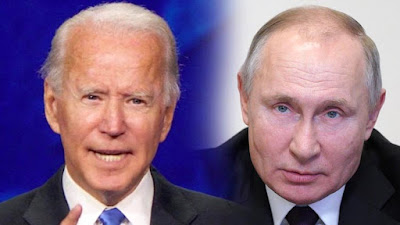 Russian President Vladimir Putin on Thursday called on US President Joe Biden to hold virtual talks after the American leader described him as a “killer”.

Speaking on the sidelines of an event marking seven years since Russia’s annexation of Crimea, Putin invited Biden to hold a “live-broadcast” or “online” discussion in the coming days.

“I want to invite President Biden to continue our discussion, but on condition that we will do this practically live-broadcast, as they say, online,” Putin said in televised remarks, suggesting the conversation take place on Friday or Monday.

He said it would be an “open direct discussion” that would be “interesting” for the people of Russia and the US.

In an interview with ABC News on Wednesday, when asked if he thought Putin, who has been accused of ordering the poisoning of opposition figure Alexei Navalny, is “a killer”, Biden said: “I do.”

The US president’s remarks sparked the biggest crisis in bilateral relations in years, and later Wednesday Russia ordered its Washington ambassador back to Moscow for urgent consultations in an unprecedented move in recent diplomatic history.

Earlier on Thursday, Putin mocked the US leader’s remarks, saying “it takes one to know one” and wished 78-year-old Biden good health.