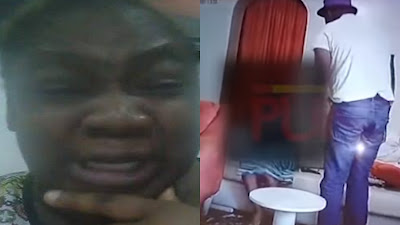 The disturbing clip, which was uploaded by an online media platform on Sunday morning, has since gone viral on social media.

Reacting through a letter signed by her lawyer Ibilola Subair on Sunday, Princess said she had nothing to do with the video’s release.

The letter titled “DISLAIMER” and shared on the troubled entertainer’s Instagram page says:

“We act as solicitors to PRINCESS DAMILOLA ADEKOYA (COMEDIAN) hereinafter referred to as our client and on whose behalf we issue this notice to the general public.

“Our client disclaims any liability or responsibility whatsoever that arises from the publication of the video on the internet or any other social media platform showing OLANREWAJU JAMES OMIYINKA (AKA BABA IJESHA) molesting our client’s foster child.

“Our client did not authorize the release of the CCTV footage by the MEDIA or any other person whatsoever.

“Our client expressly disclaim (sic) any liability whatsoever for any loss however, arising from the content of the CCTV footage released to the general public through the MEDIA.”