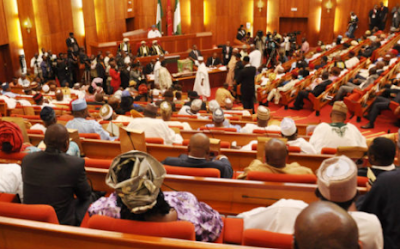 The caucus of the All Progressives Congress (APC) Senator says President Muhammadu Buhari is putting in his best efforts to address security and economic challenges facing the country, warding off criticisms against the ruling party.

The Senate Majority Leader, Senator Abdullahi Yahaya (APC-Kebbi) made the disclosure on behalf of the APC caucus at a news conference in Abuja on Wednesday in reaction to a statement credited to the PDP minority caucus in the National Assembly on the handling of the security situation in the country by Mr Buhari.

“We want to assure Nigerians that Mr President is in charge of government and is discharging his duties conscientiously and patriotically,” Mr Yahaya said. “We are confident that the nation will surmount its current security challenges.”

Mr Yahaya said that the federal government was aware of the challenges and working to massively get the economy working for Nigerians.

He stressed that the various interventions in agriculture and social sectors, as well as infrastructural development were meant to reduce the pains of the economic downturn on ordinary Nigerians.

“We therefore call on our distinguished colleagues and indeed all Nigerians to join hands with us as we proffer solutions to these hydra-headed security challenges.

“In doing so, we want to assure Nigerians, and the international community that the rule of law will be respected and the rights to political opposition guaranteed.

“We ask for support and continuous constructive criticisms as envisaged by the tenets of our participatory democracy,” he added.

The APC senator suggested that the criticism by opposition senators amounted to threats to the authority of the president.

“We reject and dissociate ourselves from all and any inflammatory statements that appear to threaten the authority of Mr. President and our party.

“We accordingly wish to remind them that blame game and threats of constitutional measures are unwelcome and will not help in any form to address the challenges the nation currently faces”.

“We in the APC caucus totally reject the many incorrect statements contained in the press release by the minority caucus in the National Assembly.

“Indeed, we are quite aware of the role of the opposition in any democracy, however, the statement by the PDP caucus has gone too far given the good working relationship in the 9th Assembly and especially with the minority caucus,” he said.

He said the statement by the minority caucus was capable of over-heating an already charged polity in which men of good conscience and patriotism are expected to act as leaders and statesmen.

“We take exception to the unfortunate charge that our president has not been seen.

“This is false and cheap politics. Mr. President and service – chiefs are meticulously busy every day and every night in deliberations with a view to addressing the security challenges across the entire country.

“Mr. President had always made statements to Nigerians on all major security incidents and assuring Nigerians and indeed the international community that he would continue to do his best in making sure that the security challenges are tackled head-on,” he said.