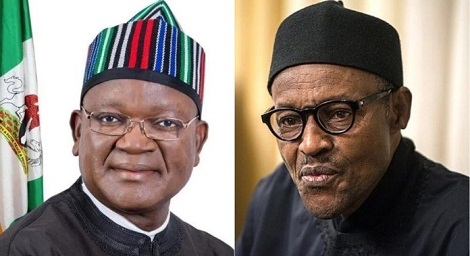 President Muhammadu Buhari has ordered ”an open and transparent probe” of the assassination attempt on Governor Samuel Ortom of Benue.

Buhari made the call Sunday night in his reaction to the attack that has shocked Nigerians.

Ortom said he was attacked by about 15 gunmen, suspected to be herdsmen, in the outskirts of Makurdi, the Benue capital on Saturday.

Buhari strongly condemned the attack, said Garba Shehu, the SSA to the president on media.

Buhari said the string of brutal attacks on individuals and communities in the state, with the latest one targeting the governor, was unacceptable.

“The President welcomes the dispatch of a high level team of crack investigators to the state from the Police headquarters in Abuja”, Shehu said.

Buhari, he said, urged the officers to uncover who, or whatsoever, was behind the attacks and bring them to justice.

In expressing his sympathies, and that of the government of the federation to Governor Ortom and all Benue indigenes, President Buhari said the unfortunate incident must not be politicized.

The President directed the Police to undertake a thorough investigation into the incident involving the governor and into all such incidents affecting individuals and communities in the state.

“Let there be open and transparent investigation and whoever is linked to it should be caught and be made to face the law,” the President directed.