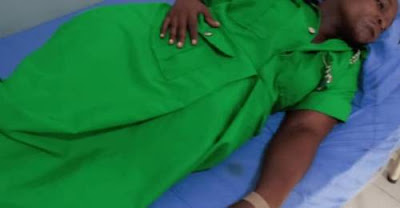 An environmental security guard, Mrs Adeola Egbebi has slumped on duty at Oja Oba market in Akure after she was allegedly slapped by the Senior Special Assistant to the Ondo state governor on special duty, Dr Doyin Odebowale.

The worker who is heavily pregnant, was reportedly assaulted by Odebowole for not standing up to greet him like her other environmental workers.

According to a local tabloid in the state, Sunshine Truth, the governor’s aide was infuriated by the woman’s action and gave her a slap.

“The woman has been working since resuming duty and it was time for the environmental security guards to leave the Erekesan market when the governor’s SSA Odebowale arrived at the place with his men and started harassing the workers but Mrs Egbebi was unable to stand up to greet him immediately which infuriated the SSA and gave the woman hot slap and she slumped,” an eyewitness said.

“The most unfortunate thing is that the SSA didn’t even care to take the woman to hospital; it was her colleagues and some good Samaritans that helped us to take to a private hospital.

“Consequently as the pregnant woman Mrs Egbebi was about to lift her chair to move to another position, to everybody’s amazement, Dr Doyin slapped the woman and immediately she fainted and the market woman rescued her with other officers to a private hospital.

“He used traditional ring to slap her.”

The incident led to a protest at the head office of the Ondo State Waste Management Board at Alagbaka as some environmental security guards shut down the gate for several hours.

Addressing the protesters, the General Manager of the Waste Management Board, Mrs Ayo Adeyemo appealed to the protesters to remain calm, saying she would visit the victim at the hospital.

Adeyemo said, “Either pregnant or not, nobody has any right to slap any worker.”