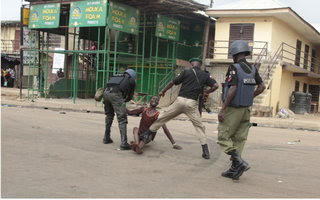 Sources said the men who invaded the police outpost very early in the morning attempted to set the facility on fire, but were quickly repelled by policemen on duty.

The state police command’s Public Relations Officer, DSP Toochukwu Ikenga confirmed the attack, stating that the men were repelled immediately, and that no live was lost.

The PPRO quoted the Commissioner of Police, Anambra State Command, CP M.B kuryas as assuring Anambra people that the command was not deterred by the criminal actions of unscrupulous individuals and groups in the state, but will continue to provide security.

Ikenga said, “The commissioner reiterates that the command will not relent in its commitment to delivering on its mandate of ensuring that peace, safety and order reign supreme in all nooks and crannies of the state.”

He added,” The hoodlums armed with guns and dangerous weapons had attempted to burn down the Station but were successfully repelled by the Police personnel on duty.

“The CP warns the criminals not to test any further the resolve and ability of the Police and other security agencies in the State to apprehend and bring them to book.

“He calls on Ndi- Anambra to, in unity, speak-out against the unwholesome and unwarranted criminal attack on security agencies and critical infrastructure in the state. He also calls on them to avail the security agencies with information that will lead to the arrest and prosecution of these criminal elements.”