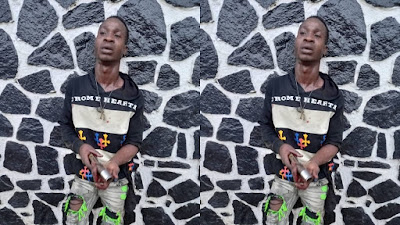 Lagos Command Public Relations Officer, Muyiwa Adejobi, said the suspect was nabbed on April 15 at about 12:10am at Olowonisaye Street in Ikorodu.

The spokesman said Isiaka terrorized residents and perpetrated many crimes in the area.

Adejobi said he had been under surveillance due to intelligence gathered on him.

Also on April 16 at about 5.45am, one Tobiloba Akeem was arrested at Itamaga by Inspector Atunramu Ojo attached to Oworonsoki Division.

The suspect, among others who fled, was arrested for his resistance to pay transport fares to the driver of a Toyota Previa Bus with Reg. No. LSD 369 FU transporting the policeman and others.

Adejobi said the ensuing argument attracted Ojo and operatives on a routine patrol who eventually arrested the suspect with weapons.

Items recovered include one locally-made pistol, some live cartridges and assorted charms.

The Commissioner of Police, Hakeem Odumosu, commended Ojo and his colleagues and directed that the suspects be transferred to the Command’s Special Squad.