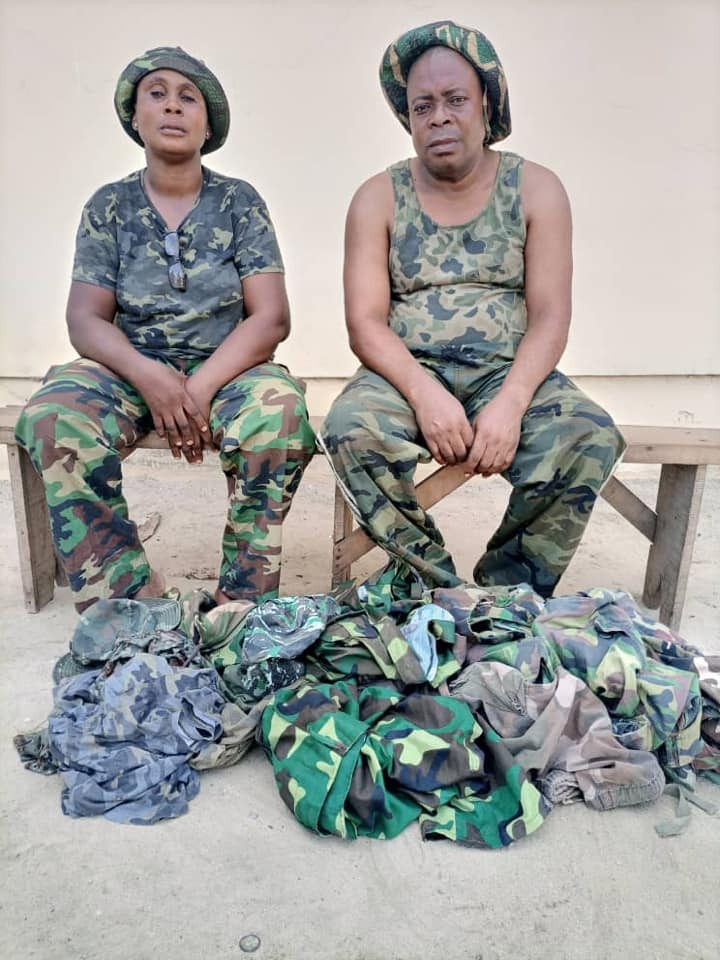 “On the 5/5/2021 at about 1300hrs, we received an information that a woman Jemilia Suleman ‘f’ age 48yrs, a native of Plateau State with one Monagor Charles ‘m’ age 61yrs of Ndokwa East L.G Area Delta State were found wearing military uniforms and lodged in Beji Court Hotel Bendel Estate Off Airport road Effurun.

“The DPO Ogborikoko Division, CSP Martha Ikong, detailed and led Surveillance operative in conjunction with military personnel to the hotel and arrested the suspects.

“Items recovered from them includes 10 pairs of military camouflage uniforms, six T-shirt, jungle caps, one T-shirt and one singlet.

“All of the military camouflage uniform. The lady suspect confessed that she bought the said uniform in the market and used it to earn a living. An investigation is ongoing,” He noted.

DSP Edafe also said, “on the 30/4/2021 at about 0430hrs, we received information from an Elu vigilante member that one Etor Lucky ‘m’ 20yrs of Elu and two other members of Viking confraternity were disrupting social wake keep and harassing invited guest in Elu community.

“The Divisional police officer Ozoro division mobilised police patrol team to the scene and arrested the said Etor Lucky and recovered a cut-to-size locally-made single barrel gun. An investigation is ongoing,” he stated.

According to Edafe, “on the 3/5/2021 at about 1430hrs, information was received from a distressed caller that a good Samaritan reported that one Efe Lucky and Ramson Akpojibu both ‘m’ of Ughoton community Okpe LGA brought a patient, Christain ‘m’ Surname unknown, to Moving Star Clinic Warri, as soon he was certified dead.

“The duo with bloodstains on their clothes were about to abscond. The DPO Orerokpe Division deployed a detective to the clinic, a corpse was viewed and signs of violence were seen on the body of the deceased. The corpse was photographed and deposited at Orerokpe General Hospital mortuary.

“The police arrested the two suspects Efe Lucky ‘m’ and Ramson Akpojibu ‘m’, and at the premises, the suspects were searched, blood-stained cutlass, hammer and blood-soaked towel were recovered.

“They confessed that they were five in number that beat up the deceased to death over allegation of stealing their three thousand naira (N3,000.00) and phones.

“Effort is on to arrest the three other suspects. The Commissioner of Police Delta State has ordered that the case be transferred to state criminal investigation department for further investigation.”