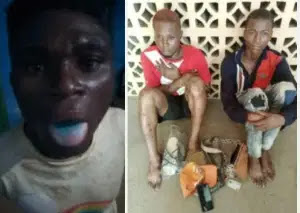 Operatives attached to Ikorodu Division of the Lagos State Police Command have arrested three suspected traffic robbers including their receiver who buys stolen items from them.

The suspects identified as: Lucky Isibor, Isah Mohammed, and Aminu Abdullahi were arrested by combined team of policemen and local Vigilante men on patrol at the Ikorodu roundabout while allegedly robbing innocent commuters and passers by in the area, on 26th March, 2021 at 11:30pm.

Some of the items recovered from them include eleven (11) phones, One Hundred and Thirty Nine Thousand (#139,000), BRT Cowry Card, black bag containing assorted charms and weeds suspected to be Indian hemp.

During interrogation, it was discovered that Lucky Isibor doubles as a receiver to traffic robbers in the area.