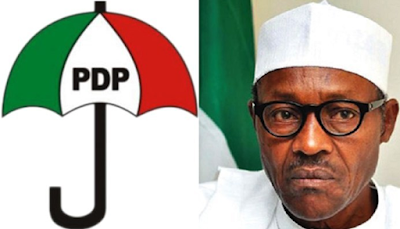 Opposition Peoples Democratic Party on Thursday, backed the call by the House of Representatives that President Muhammadu Buhari should declare a state of emergency on security, with the growing spate of attacks and kidnappings across the country.

The party’s position was contained in a communiqué issued at the end of an emergency meeting of the National Executive Committee of the party on Thursday in Abuja.

The communiqué signed by the party’s National Publicity Secretary, Kola Ologbondiyan, partly read, “NEC lamented the heightened insecurity pervading all parts of our nation due primarily to the misrule of President Muhammed Buhari and All Progressives Congress as well as their failure to decisively tackle the menace of terrorism, banditry, kidnapping, bloodletting and acts of violence in our country.

“NEC also urged President Buhari to, without delay, convoke a national conference on Security so as to galvanize ideas and options to tackle insecurity in our country.

“NEC further commended the efforts of governors, senators, House of Representatives members and other officials elected on the platform of the PDP in forcefully seeking solutions to the spate of insecurity in our country.”

From Maiduguri in North-East Nigeria to Mbaise in the South-East; and from Kafanchan in the North-West to Kajola in the South-West, the killings and kidnappings soar, almost unprecedented.

Many Nigerians including senators and governors have in the last few days urged the President to seek foreign help to put a stop to the ceaseless bloodshed and kidnappings nationwide.

The former military head of state finally caved in to pressure on Tuesday when he asked the US Secretary of State, Anthony Blinken, for the support of the Joe Biden administration to tackle the security menace in Nigeria.

Buhari, who warned of a likely spill over of insecurity to neighbouring West African states, also called on the US to consider relocating US Africa Command from Stuttgart, Germany, to Africa, nearer the Theatre of Operation.