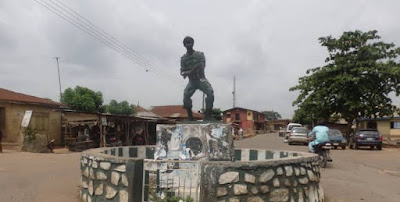 A policeman, Corporal Akinsanya Akingbade, was on Friday shot dead, as residents of Ile Ogbo and Iwo, in Osun State, clashed over boundary.

According to an eyewitness, the clashes occurred around Oke Saaji area along Iwo/Ile Ogbo Road, when some youths mounted a roadblock on the road.

The death of late Akingbade, attached to Olu of Ile Ogbo, Oba Abeeb Agbaje, reportedly occurred when he was reportedly shot by a local guard also working with the monarch.

Some people were also said to have sustained injuries during the clash which lasted some hours before police operatives deployed to the area could restore normalcy.

To avoid being caught in the mayhem, many residents close to the disputed area were also said to have fled their homes.

Press Secretary to Oluwo of Iwo, Alli Ibraheem, told Saturday Punch that the monarch had already contacted some stakeholders to ensure peace in the area.

Ibraheem said, “Oluwo is after peace and presently, he is in a meeting with the Deputy Governor and the Commissioner of Police. Olu of Ile Ogbo is also attending the meeting.”

But the President, Ile Ogbo Unity Forum, Mr. Anthony Owolabi, alleged that some residents of Iwo mounted a roadblock along Ile-Ogbo Road which escalated the crises.

He said, “On Wednesday, Iwo people had destroyed an Ile-Ogbo signpost on the land and that of the state government close to it. The land was a subject of litigation up to the Supreme Court and the judgment was given in favour of Ile-Ogbo.

“The Area Commander in Iwo was with Olu of Ile-Ogbo before thugs from Iwo attempted to invade the town. They were on the verge of entering the town before they were repelled.

“We have our documents to support our claim, we gave same to the Area Commander and we requested that they bring their papers. But rather present it, they resort to using hoodlums bearing weapons to cause crisis.”

She added, “The victim gave up the ghost on the way to hospital. His corpse was deposited at the morgue of the State University Teaching Hospital, Osogbo for autopsy. The suspect, who is also a palace guard on duty with the deceased, had been arrested for further interrogation.”