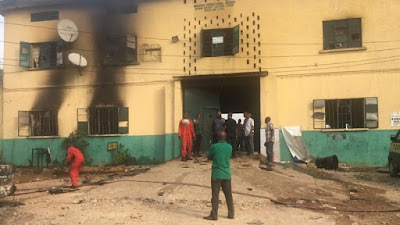 The federal government says it is preparing to publish names and photos of fleeing Owerri prison inmates in a frantic effort to recapture them, Peoples Gazette learnt.

“As I speak with you, they (information about fleeing inmates) are being processed. Our IT experts are currently working on it. We have their complete pictures and bios. We will publish their pictures online and other strategic places where the general public can see,” said Francis Enobore, spokesman for the Nigerian Correctional Centre (NCoS), in response to The Gazette’s inquiry.

On Monday, the correctional facility and police investigations department in Owerri were set alight by gunmen in an overnight attack.

Mr Enobore, on Wednesday, told The Gazette that no bounty had been placed on the fleeing inmates.