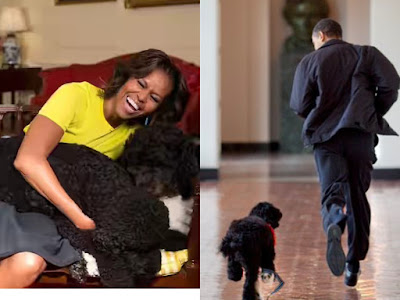 Bo, a Portuguese water dog given to the Obama children, Sasha and Malia, by Sen. Ted Kennedy and his wife Victoria in 2009, was roughly 12 years old.

“Today our family lost a true friend and loyal companion,” Obama tweeted. “For more than a decade, Bo was a constant, gentle presence in our lives—happy to see us on our good days, our bad days, and everyday in between.”

He tolerated all the fuss that came with being in the White House, had a big bark but no bite, loved to jump in the pool in the summer, was unflappable with children, lived for scraps around the dinner table, and had great hair. pic.twitter.com/1x4VOMsLGR

“This past year, with everyone back home during the pandemic, no one was happier than Bo,” she wrote in the post. “All his people were under one roof again—just like the day we got him. I will always be grateful that Bo and the girls got to spend so much time together at the end.”