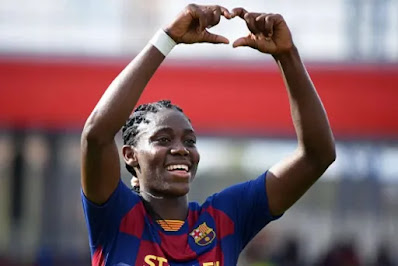 Super Falcons striker, Asisat Oshoala, netted the only goal for Barcelona, as they lost 2-1 to Manchester City in the second leg of their Women’s Champions League quarter-final tie on Wednesday.

The Spanish qualified for the semi-final however, as they had won 3-0 in the first leg.

Oshoala was making her seventh appearance in the European competition.

She started the encounter along with Caroline Graham Hansen and Mariona Caldentey in the attack for Lluis Cortes’ team.

City opened scoring through Janine Beckie in the 20th minute.

After the restart, Caldentey brilliantly set up Oshoala, who made no mistake to fire past Lucy Bronze and Robuck in the 59th minute.

Samantha Mewis converted from the penalty spot for secure victory for City on the day.