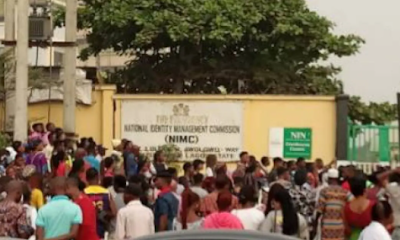 A Federal High Court in Lagos State has barred the Federal Government from blocking SIM cards not linked to National Identity Numbers next month.

The Ministry of Communications and Digital Economy had, through the Nigerian Communications Commission, asked operators to block all SIM cards not linked to NIN by April 9, 2021.

The deadline had caused many Nigerians to gather at offices of the National Identity Management Commission in disregard of Covid-19 protocols.

However, a former second National Vice-President of the Nigerian Bar Association and human rights lawyer, Mr Monday Ubani, filed an originating motion and asked the court to stop the Nigerian Communications Commission from disconnecting all SIM Cards not linked to NINs.

The first to fourth defendants in the suit are the Federal Government, Attorney General of the Federation, The NCC and the Minister of Communication and Digital Economy.

Ubani sought four reliefs including an order that the two-week ultimatum is inadequate and will not only cause him hardship but will also infringe on his fundamental right to freedom of speech and right to own property as provided under sections 39(1) and 44(1) of the Constitution of the Federal Republic of Nigeria, 1999 (as amended).

He also sought an order of the court extending the deadline.

Delivering judgment on March 23, 2021, Justice M.A Onyetenu, ordered that the deadline be extended by two months from the day of the judgement.

Claims of alleged killings at Lekki tollgate not verified - US Report