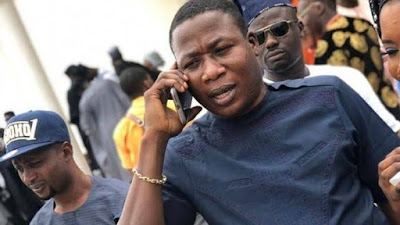 The Nigeria Defence Headquarters has issued a strong warning to Sunday Igboho and other individuals bent on disparaging its reputation to gain political mileage.

The Defence Headquarters gave the warning in a statement released on Saturday night while reacting to the report titled “SUNDAY IGBOHO APPREHENDS ALLEGED SOLDIERS, ACCUSES FEDERAL GOVERNMENT SPYING ON HIM.”

The Defence Headquarters noted that the “spy” alarm raised by Igboho was false, adding that it will never stoop so low to such extent to “spy” on the self-acclaimed “Yoruba activist.”

The military, however, warned that such false alarm from Igboho and others will not be condoned in the future.

Read the full statement from the Defence Headquarters below

The statement signed by The attention of the Defence Headquarters has been drawn to a trending video clip on the Social Media, and some other media reports with the above headline, alleging that some Nigerian Military personnel were on a spying mission to the residence of one Sunday Adeyemo otherwise known as “Sunday Igboho” before they were apprehended.

In the viral video which was released on Friday 19 March 2021, the alleged “soldiers” were seen being accused of having been sent by the Government to do a ‘survey’ of Sunday Igboho’s Soka residence in Ibadan, the Oyo State capital. The self-acclaimed ‘Yoruba activist’ also alleged that the action of the so-called “soldiers” was orchestrated by the Federal Government as a result of comments he made alleging that Yorubas are no longer a part of Nigeria.

While the Defence Headquarters has no interest in dragging or joining issues with Sunday Adeyemo or his associates, it is pertinent to clear the air and address these allegations squarely.

For the records, it should be noted that the Armed Forces of Nigeria, are highly professional in the discharge of their duties, with well-defined roles, responsibilities and duties in its mandate of securing the territorial integrity of the Nigerian Nation. As such, the Military cannot stoop so low to such extent to “spy” on one individual, as wildly and loosely alleged.

Secondly, the Armed Forces of Nigeria is a highly disciplined and professional organization with extant laws and regulations which guide the actions of its personnel in the conduct of their duties. As such, it is practically impossible for military personnel on official duty to conduct themselves in such a manner as alleged by Adeyemo and his cohorts.

For the avoidance of doubt, preliminary investigation has so far revealed that one of the alleged “soldiers” is a serial impersonator. Meanwhile, credible eyewitnesses and sources have also revealed that some associates of Igboho went in pursuit of some individuals when the motorbike conveying the impersonator and one Nigerian Air Force personnel ran into them. The duo were immediately apprehended and taken to the said “IGBOHO House” at Soka before Ibadan toll gate where they were branded as spies. Furthermore, investigations are currently underway by Nigerian Airforce and the Nigerian Army to unravel the actual circumstances which played out on the day.

The Defence Headquarters hereby warns individuals and groups to desist from disparaging the enviable reputation of the Nigerian Military by dragging it into its petty issues to gain political mileage. Such actions will not be condoned in the future.

Grammy Award: I did it on my own, Burna Boy boasts

Girl stabs brother to death for querying her absence from home