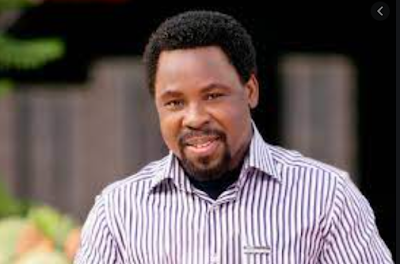 Prophet TB Joshua has released the video of a prophecy for Nigeria which he gave almost seven years ago on July 27, 2014.

In the video, the Synagogue, Church of All Nations (SCOAN) general overseer predicted that Nigeria would be covered by a cloud of “crisis, murder, killings, destruction”, but would not break up.

“Nothing will happen to Nigeria. Nigeria will remain one,” Joshua assured the congregation during a service at SCOAN.

The video’s release comes amid sustained calls for Nigeria’s breakup by both the proponents of a Biafran government and other aggrieved persons and organisations, following worsening terrorism, kidnapping and banditry.

“Beyond this crisis, Nigeria is beautiful. Your prayer now is that you should witness it so that this crisis will not take you away,” the cleric declared.

“It is decreed that this nation will be reckoned with as a powerful nation,” he continued, adding that his prophecy would become a point of reference many years later.

However, he warned members of the ‘political class’ of impending repercussions for their contributions to the crisis.

“Huge trouble is coming and no human being will withstand it unless you don’t have hand in that trouble,” he boldly declared.

“There is a cloud that covers Nigeria… the cloud of crisis, murder, killings, destruction covers Nigeria. The cloud will go; Nigeria will remain.”

Joshua then questioned the rationale of those who are “interested in power that cannot give them peace”.