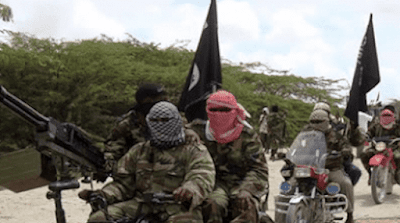 The embattled Niger communities have resorted to negotiating and signing a peace deal with Boko Haram terrorists to avoid future raids.

This was revealed few days after the Governor of Niger state Sanni Bello confirmed that the insurgents rule five local governments in the state.

The governor said the terrorists had taken over Kaure axis in Shiroro Local Government Area in the state. They are also in Munya LGA.

Bello spoke to newsmen when he visited the Internally Displaced Persons (IDPs) camp at IBB Primary School in Minna on Monday.

Though the Nigerian Army said it was unaware of the development but Wasiu Abiodun, the police spokesperson in the state, said he could not dispute Governor Bello’s claim.

However, it has now been gathered that communities in Gurmana, Manta, Bassa and Kukoki districts in the Shiroro area of the state had negotiated with the terrorists for a peace deal after reaching an agreement to pay a certain amount of money.

Yusuf Sani, the co-convener of Concerned Shiroro Youth told the Punch that the communities had paid “not less than N20 million to sign the peace deal with the terrorists.”

He said the communities had also purchased at least six motorcycles worth N500,000 for the terrorists.

Yusuf Sani added that: “This is what most of the communities are resorting to. By my records now, communities that have signed the peace deal with the terrorists are more than 40.

“While some communities have already sealed up deals for a ceasefire with the terrorists and are currently reaping the benefits, others are on the verge of finalizing theirs.”