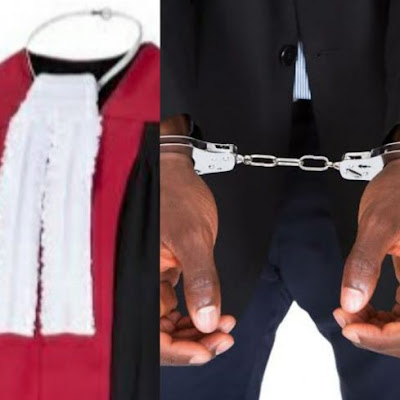 There was drama at an Abuja Magistrate’s Court as the magistrate, Ibrahim Mohammed, ordered policemen to arrest and handcuff a lawyer, Eburu Barth, for challenging him on the summary of the case before the court.

It was gathered that the lawyer was thereafter handcuffed and led out of the courtroom.

The lawyer was said to have been taken to Suleja Correctional Centre.

However, the Nigerian Bar Association, Unity Bar, Abuja, on Tuesday protested what it called arbitrary use of power by the magistrate, , against Barth.

The association’s position was contained in a statement by its secretary, Adebiyi Adetosoye, titled “Press release on the arbitrary use of judicial power by Magisterate Ibrahim Mohammed of Zone 6 Magisterate Court, Abuja.”

The association said while it condemns every unruly act or disrespect to the court, it finds it “extremely offensive and the highest level of abuse of power” to summarily sentence a lawyer to jail without giving him a fair hearing.

According to the statement, the association has filed an application to review the order of court sentencing the lawyer to jail without fair hearing and that over 20 lawyers have offered to take on the matter.

The statement read in part, “We have also reached out to the necessary authorities to ensure that this order of court is reversed immediately.

“We are also going to be submitting a petition against the magistrate and ensure this trend is permanently put to a final stop.”