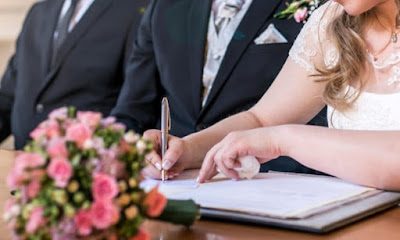 Marriage certificates in England and Wales will now include the names of both parents of each half of the couple, instead of only their fathers, after legal changes to the process came into force.

The change is part of the introduction from Tuesday of a new digital system to modernise, simplify and speed up the process by which marriages are registered, helping to tackle a backlog.

The Home Office said the reforms were “the biggest changes to the marriage registration system since 1837” and would “correct a historic anomaly” by allowing for the mothers’ details to appear on the marriage entry for the first time.

Marriages are currently registered by the couple signing a register book, which is held at each register office, in churches and chapels, and at registered religious premises.

The Home Office said the creation of a single electronic marriage register would save time and money and be more secure, as the new system eliminates the need for data to be extracted from hard copies.

The reform to the Marriage Act marks the first time the names of both parents of the couple will be included on the marriage certificates, rather than just the names of the father or stepfather of each of the parties, a change that the government has previously resisted on cost grounds.

Efforts to make the change have stalled several times over the years. The latest began as a private member’s bill introduced by the Tory MP Tim Loughton, which received royal assent in March 2019, proposing to move from a paper-based system to registration in an electronic register.

Kevin Foster, the minister for future borders and immigration, said: “These changes bring the registration process into the 21st century and means no parent will be missing on their child’s wedding day.”

The changes have been made in consultation with stakeholders, such as the Church of England. The Rev Dr Malcolm Brown, director of mission and public affairs for the Church of England, said: “We are very pleased that the marriage registration system can now include the names of mothers as well as fathers on registers.

“Changing practices that go back many years is never straightforward, but we believe the new system changes as little as possible in terms of the couple’s experience of their church wedding and that the clergy will find the new regulations become second nature very quickly.”