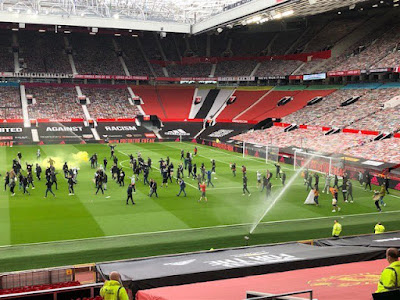 A group of Manchester United fans have stormed onto the playing surface at Old Trafford, ahead of today’s game with Liverpool.

Around 10,000 fans were expected outside the ground to protest at the club’s Glazer owners this afternoon, with a number breaking into the stadium and onto the pitch.

Videos circulated showing fans chanting in front of the South Stand on the pitch, many holding placards and others with flares in green and gold colours. The Premier League say there has been no coronavirus breach as no supporters have gained entry to dressing rooms.

Much of their ire has been directed at the Glazers and Ed Woodward, the executive vice chairman who tendered his resignation recently, though they could also be heard singing anti-Liverpool songs and serenading pundit Roy Keane, the former United captain.

Supporters who organised the protest called for it to pass by peacefully, a stance also taken by Ole Gunnar Solskjaer, who respected fans’ right to demonstrate.

But United had also been concerned supporters would cause disruption to the Premier League game against Liverpool, set for a 4.30pm kick off today (Sunday).

It was feared fans could prevent the team buses entering the ground, with some protesters placing themselves outside United’s team hotel, the Lowry, from where they travel to Old Trafford before home matches.