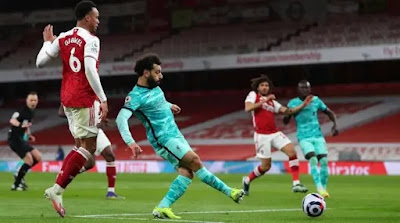 Diogo Jota came off the bench in the second half to head in the opener from Alexander Arnoid’s cross.

Mohamed Salah then nutmegs Bernd Leno for Liverpool‘s second goal within the space of five minutes after the first goal.

He made a great solo run and pulled the trigger from inside the box, beating Bernd Leno with a low strike into the middle of the goal.

Jota got his brace and made it three goals for Liverpool to claim all three points.

Jota showed good composure inside the box to fire a first-time shot into the top of the net.

Arsenal rarely threatened the Liverpool’s defence with a very poor display for the night.