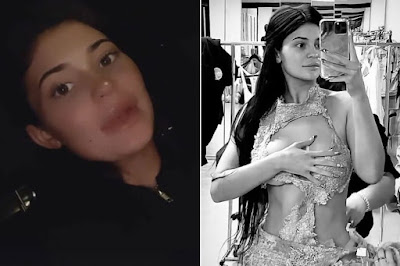 Kylie Jenner ditched her usual full make-up and filters for an unusually bare-faced look in a new Instagram video.

The 23-year-old reality star and beauty entrepreneur looked casual as she spoke to fans from her car before and after a photo shoot for her Kylie Cosmetics range in yesterday’s post.

Holding a morning coffee and wearing a smart black coat, she videoed herself arriving at the shoot – held inside her “headquarters”.

She told fans: “I just got to my shoot – 10 minutes late which is unlike me.

“I usually don’t show you guys a lot of behind the scenes because I do things so far in advance – I’m already working on 2022 – I don’t want to spoil anything for you guys. But I’m going to take you along today so let’s go.”

The barefaced star then filmed herself being dressed by assistants in a low-cut lacy silver dress and matching heels before perching on the lap of her make-up artist pal Ariel.

After the shoot, the star told fans: “That’s a wrap. It was an early day today usually my shoots go on until midnight. But we finished fast today I can’t wait for you guys to see what we’ve been working on for Kylie Cosmetics.”