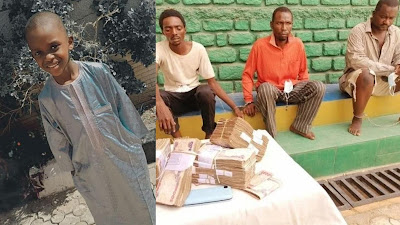 The CP, who was represented by Police Public Relations Officer of the Command, ASP Mohammed Jelige said:”On the 29th April 2021 one Alhaji Kabiru Magayaki, reported that his son Mohammed Kabiru 6yrs was abducted on the 24th April 2021 and the abductors demanded the sum of Thirty Million Naira (N30,000,000.00) as ransom to secure the release of the victim.”

He added negotiating parties however agreed for N1million, which the family paid but could not secure the freedom of the victim.

He further said the investigation revealed that Mohammad Nazifi, who orchestrated the abduction, is a neighbour to the complainant making it easier for him to lure the innocent child by sending him on an errand to a location where Sani Adamu was already waiting to kidnap him.

“Consequently, Mohammed Nazifi on sensing the possibility of the victim revealing his identity after regaining freedom decided to strangle him to death and concealed the body in a drain system in the outskirt of Kano Municipal, Kano State.

“The suspects have confessed to the commission of the dastardly act led the Police to where the decomposing body of the victim was identified and evacuated to Murtala Mohammed Specialist Hospital Kano for autopsy.