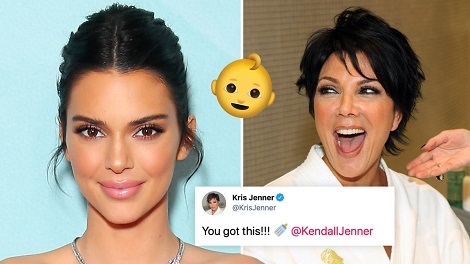 Kendall Jenner was forced to shut down speculation she was pregnant on Thursday, after her mother Kris Jenner sent tongues wagging when she posted a baby bottle emoji.

The model, 25, was inundated with messages online asking if she was expecting her first child after fans believed Kris’ emoticon was a cryptic hint she was pregnant.

The rumours first started when Kris, 65, wrote ‘You got this!!! @Kendall Jenner’, alongside the baby-themed emoticon.

Shortly after Kris’ original Tweet was posted, many Keeping Up With The Kardashians fans reacted in shock of what appeared to be a baby-themed tweet.

‘Don’t u think she’ll be the cutest mommy? #KUWTK,’ wrote one user, with another clarifying to those NOT tuning into Thursday night’s episode of Keeping Up With The Kardashians that Kendall was on ‘babysitting’ duty.

Kendall, making sure that there were no misconceptions, took to her own Twitter, where she acknowledged that her mom’s out of context tweet read like a ‘pregnancy announcement.’

‘mom, this looks like a pregnancy announcement!’ wrote the runway maven, followed by a laughing emoji and a face-palm emoji.

‘Wait whatttt?’ wrote one confused fan, prior to Kendall’s clarification. While another penned in all caps: ‘WAIT SHES PREGNANT’

‘I really thought this was a pregnancy announcement, that one emoji,’ read one tweet, referencing to Kris’ baby bottle emoji choice.

Kendall is the only Kardashian-Jenner sister who is yet to have children.